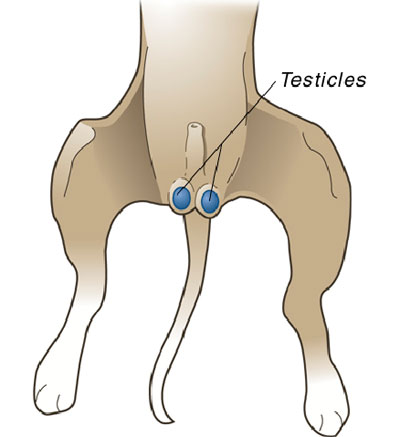 Neutering is a word that refers to essentially making the gender of the pet “neutral,” so to speak, thus it does encompass both males and females. Popularly, however, the term has become used to designate altering the male, while spaying is the term used for altering the female.

Castration (or orchiectomy) is the proper term used for the neutering of the male dog; as in the procedure the testicles are removed. Some people believe that a vasectomy is done, but that is incorrect. The goal is not to only prevent sperm release, rather to eliminate the male sex hormones and the effects it has on the body. By eliminating the testosterone it dramatically reduces the risk of prostate disease (cancer, infection, benign hypertrophy), eliminates the risk of testicular cancer and perineal hernias (hernias around the anal area), reduces the urge for urine marking, calms aggressive tendencies and sexual behavior as well as eliminating sperm production/release. It is recommended to perform the procedure when the dog is 6-7 months of age, before these hormonal behaviors become ingrained in the dog.

Some people believe by neutering the male they become fat and inactive, however, this is not the case at all, it is how they are fed and exercised. The most important reason to neuter your male dog is to insure that he will have the best opportunity to lead a long, healthy life without the risk of diseases or complications related to the presence of the male hormone.