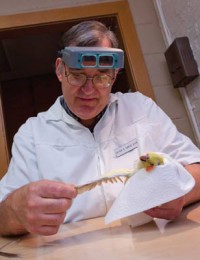 Peter S. Sakas received his BA (Bachelor of Arts) degree in biology from Northwestern University in 1974. He then traveled to Auburn University in Alabama and pursued his MS (Master of Science) degree in Zoology-Entomology which he achieved in 1979. While at Auburn, he studied the immune response of dogs with canine heartworm disease in conjunction with the Auburn University College of Veterinary Medicine. He presented his Master’s research findings at regional and national parasitological association meetings. In addition he helped develop a test for the detection of occult heartworm disease in dogs and cats which led to a publication in the Journal of the American Veterinary Medical Association (JAVMA).

While a graduate student at Auburn University, he received a teaching assistantship and assisted in General Biology, Animal Biology and Cell Biology classes for four years. He was named to a faculty position at Auburn University as a lecture instructor in Animal Biology during the 1978-79 school year where he taught classes of 75-150 students. He was also very involved with youth sports, coaching teams in football, basketball, and baseball while at Auburn.

Despite his success at Auburn University, his lifelong goal was to become a veterinarian and his graduate school experience was a stepping stone to realize that dream. He gained acceptance into the University of Illinois College of Veterinary Medicine where he began classes in the fall of 1979 and received his DVM (Doctor of Veterinary Medicine) in 1983. He received a research assistantship while in veterinary college and began conducting his diagnostic test for occult heartworm disease, which had been utilized at Auburn University. In 1981, he conducted a Veterinary College-wide survey of the student body, dealing with stress in veterinary students. He presented his findings to the American Veterinary Medical Association national convention in St. Louis that year.

He has been involved with Niles Animal Hospital since 1980 when he began working as a student extern at the hospital under the direction of the noted avian veterinarian Dr. T. J. Lafeber. He worked at Niles whenever he was on break from college through his years in veterinary school. Dr. Sakas became a staff veterinarian upon graduation in 1983 and Dr. Lafeber groomed him to be his successor. He bought the practice from Dr. Lafeber when he retired in 1985 and has owned it since then.

Dr. Sakas has written numerous articles related to various aspects of dog/cat care, wildlife, avian medicine and pet bird care. He contributes to various bird club question and answer sections or articles for their newsletter. Many of his articles can be viewed on a wide variety of avicultural web sites as well. He has authored the avian section of the American Animal Hospital Association’s publication. Exotic Formulary. He is also authored the book, Essentials of Avian Medicine. A Guide for Practitioners Second Edition ( 2002), also published by AAHA. He has contributed to other avian books as well. He was on the editorial board for Veterinary Forum Magazine and was a contributor for Pet Veterinarian Magazine. He also is a regular columnist for a local newspaper with columns covering a wide range of pet related topics. He is a regular guest on nationally broadcast Relevant Radio’s “On Call with Wendy Weise” answering listener’s questions about pet health care (relevantradio.com).

He has served ( and is still serving) on the boards of several veterinary organizations and has held directorships for various humane and wildlife associations. He is on the advisory board for Phi Kappa Psi Fraternity at Northwestern University and is the editor of the alumni newsletter. He is active in various community activities, including serving as a Little League Manager for several years. He is also “moonlighting” as a rock music critic, writing reviews of various rock bands for Rock Chicago Online Magazine (rockchicago.net). He is married with a daughter and a son. His household is controlled pandemonium with eleven pets, including dogs, cats and birds.