Unfortunately, it is occasionally necessary to try to foster a foal onto a mare that is not its natural mother.  This may be for any one of a number of reasons.  The common ones are:

For mares who are ill or die at or soon after foaling.

For mares who have a history of savaging their foals.

For mares who need to be transported for long distances for mating or competition and where the owner/manager does not want the foal to travel with her.

When foals have been ill soon after birth and separated from their mare for treatment, the mare may no longer produce milk and/or may lose interest in her foal.

The mare may not produce enough milk to feed her foal, either due to her age, some illness or problems with her mammary glands. 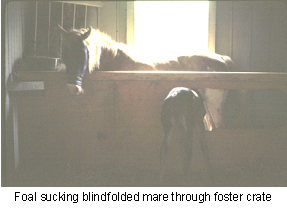 Choice of foster mare
Any mare that is to be used as a foster mare must be of a suitable temperament i.e., relatively quiet, well handled and a good mother who is unlikely to harm her new foal, once bonded.  She must also be able to produce the volume of milk necessary to nourish and encourage the normal growth of her new foal.  Draft cross mares make particularly good foster mares because of their calm temperament and the volume of milk that they usually produce.  The foster mare must be disease free and preferably vaccinated against tetanus and equine influenza and Equine Herpesviruses.  Even when a foster mare is required following an emergency, when speed is of the essence, the risks of introducing infectious disease must be considered and assessed, in order to protect other horses.  Your veterinarian will help you with this.

In most cases, a mare only becomes available for use as a foster mare if she loses her own foal.  In some circumstances, such organizations may accept your foal in order to achieve the fostering process, or may send an experienced groom with a foster mare to stay at your premises until the foal is fostered successfully.  Your veterinary practice or other local breeders may have heard of a mare who has become available for fostering due to the death of her foal, or alternatively of a foal that has become orphaned.  Your veterinarian can discuss the options available with you.  Some large stud farms maintain a group of mares for their own use as foster mares.  These mares' own foals are weaned as required and then usually hand-reared in a group.

The foal
Foals for fostering should ideally be less than 3 weeks of age as they are more difficult to foster after this time.  All foals are born without natural protection against infection.  If a newborn foal is to be fostered it is essential that it receives colostrum either from its own dam or from a donor source within the first 24 hours of its life.  If it is not possible to obtain colostrum the foal should receive a plasma transfusion from a suitable donor.  This is something you should discuss with your veterinarian.  For fostering to be successful, the foal must be strong and well enough to stand and nurse unassisted.  It must be able to suck vigorously before any attempt at fostering is made. 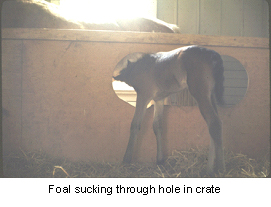 Preparing the mare and foal for introduction
If the mare has lost her own foal at or near foaling ask if it is possible to have her own placenta, as this may be useful during the fostering process.  The mare should be left in the box with the dead foal.  It was once common practice to skin the dead foal and to use the skin as a 'coat' for the foal to be fostered.  This technique is now considered unhygienic and unwarranted.  Once the bereaved mare is quiet and calm, the dead foal should be removed and replaced with the foal to be fostered.  Ideally there should be two or three capable people assisting a fostering process.  The mare should be deeply sedated and held in a bridle by a competent handler.  Many people apply a strong smelling ointment (such as Vicks Vaporub) to the mare's nostrils to mask the smell of the foal, but this is not always helpful or necessary, depending upon the response of the individual mare.  A twitch should be available in case it is needed.  The mare's udder should be clean and full of milk but not tight or painful otherwise she may resent the foal's approaches.  The foal should be made hungry by withholding milk for a couple of hours prior to introduction, but not weak by excessive withholding of food.  Where possible its own smell should be masked by rubbing its coat with the foster mare's own placenta or by fitting it with a clean foal rug.

The introduction
The introduction should be made in a relatively large, clean stall.  The mare is held firmly and confidently with her hindquarters in a corner and the foal is introduced to her at the level of her shoulders, keeping the foal and handlers away from her back legs.  The foal should be held so that the mare can see and sniff the new foal.  The mare's reaction is monitored closely.  If very fortunate, her response will be to call and 'talk' to the foal immediately as though it was her own, suggesting that she will readily accept the orphan foal.  More commonly, mares behave unpredictably and aggressively, attempting to bite, strike and/or kick at the foal.  The mare must be clearly reprimanded for showing this type of behavior.  In such cases it may be necessary to apply the twitch, hold a front limb up or pinch a fold of skin just in front of the shoulder to see if this will distract the mare enough to allow the foal to approach her more closely.  Some mares who may be frightened or otherwise upset by the sight of the new foal may respond to being blindfolded (see photo).  The foal must not be put at risk and it must not be left unattended at this stage as initial apparent acceptance may 'wear off'.  Some mares may be 'intelligent' enough to wait patiently for an unguarded opportunity to be aggressive.  Even where fostering is successful it can take many hours and even days for the mare to fully accept the foal.  The foal is usually happy to suck but will soon be discouraged if the mare behaves aggressively towards it or will not allow it to suck.  At this stage it is useful to let the foal wander around in the stall slightly away from the mare so that she can see it and get used to its presence in her box.  If the foal wishes to lie down, let it do so but at a safe distance from the mare.  Every now and then encourage the foal to approach the mare and attempt to suck.

If the mare remains aggressive towards the foal in spite of combinations of sedation, twitch, voice and other restraint, it is not worth persevering and it will be necessary to try to obtain an alternative foster mare.

It may take only a few minutes or sometimes many hours or days to be sure that a fostering has been successful.  Once the foal is sucking and moving freely around the stall without the mare threatening it or preferable with her calling and apparently accepting it as her own foal, sedation can be discontinued.  Do not leave the mare and foal alone together until you are totally confident that acceptance is complete.

Some stud farms have designed and built specially constructed crates or partitions in which to restrain the foster mare, while the foal sucks conveniently and safely through a strategically placed hole (see photo).  While this technique can be helpful, convenient and labor saving, it is only safe and humane to use when the mare has almost completely accepted the foal.  The mare and foal must nevertheless be closely observed. 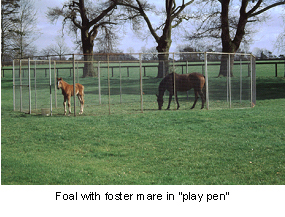 Mare milk replacer must be available for use where the fostering process is going slowly, in order to provide the foal with essential nourishment and fluids to maintain strength while not abolishing hunger and the desire to suck.

Conclusion
Fostering can be a very successful and satisfying exercise.  Most mares make natural mothers and it is always nice to see a mare that has lost her own foal accepting another mare's foal.  Orphaned foals that are raised on foster mares are easier to manage, healthier and better developed both physically and mentally than hand-reared foals.  Hand-reared foals seldom thrive and usually lack social development.  However, if there is serious risk of injury to the foal during an attempt at fostering, or if a foster mare is not available, hand-rearing may be the only option.